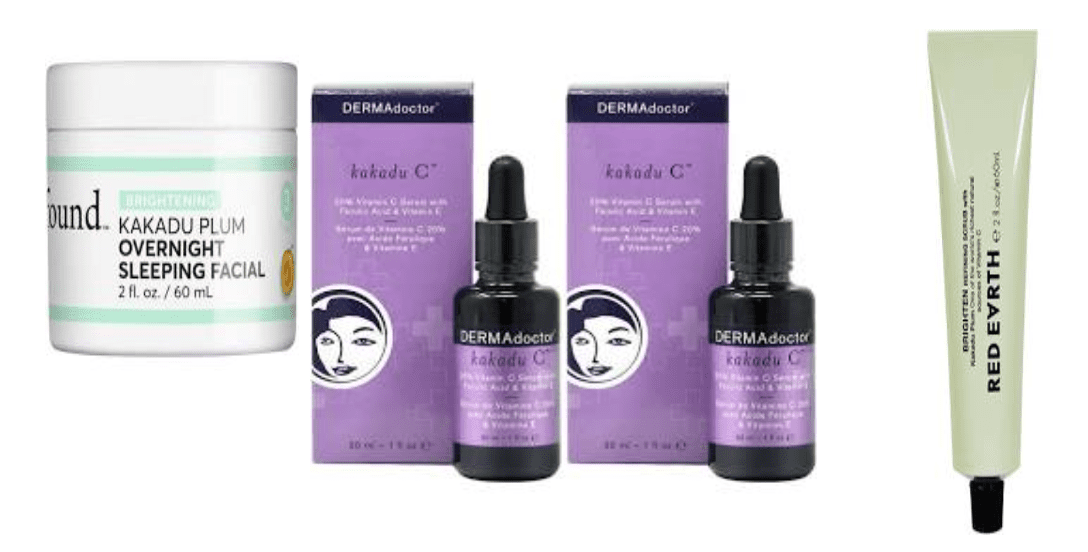 Kakadu Plum has 100 times more Vitamin C than Florida Oranges. To be exact, up. to 6% of the weight of the Kakadu Plum fruit is pure vitamin C. That’s 3000% the recommended daily value of Vitamin C in a 3.5-ounce fruit!

What makes Kakadu Plum so effective in fighting UV-damage, age spots, and wrinkles? You guessed it! Vitamin C concentration in Kakadu Plum is the highest ever recorded of any fruit, and this helps fibroblasts to produce collagen underneath the skin keeping our skin firm and young looking. We have not even discussed the other ingredients in Kakadu Plum that promote even skin texture and tone. These include Vitamin E and Iron (Kakadu Plum being a vegan source), zinc, folate and lutein.

We have all heard of the benefits of antioxidants for skin, and Kakadu Plum is one of the best sources of free-radical scavenging, reactive oxygen hunting, cancer fighting phenolic compounds. Kakadu Plum has five times more phenolic compounds than the next best antioxidant fruit, blueberries. There are other reasons why this Australian bush plant is antioxidant rich. It has flavanols, aromatic acids such as ellagic and gallic acids, anthocyanins, and lutein, which are all known for their antioxidant properties.

“Vitamin C concentration in Kakadu Plum is the highest ever recorded of any fruit, and this helps fibroblasts to produce collagen underneath the skin keeping our skin firm and young looking.”

However, all-natural resources are limited, and Kakadu Plum is no different. Sustainability is key to making sure the world can enjoy the benefits of Kakadu Plum for future generations. Luckily, the Australian local government has taken a strong initiative to preserve the habitat of native mammals such as bandicoot, possums, rock rats, and tree rats that rely on Kakadu Plum for their nutrition.The Binaiz and Mungguy people also rely on Kakadu Plum for their livelihood. As the world awakens to the countless benefits of Kakadu Plum, the cosmetic industry needs to be mindful of over exploitation of this this wonderous fruit.

Disclaimer: The name of the fruit you just read is a real name and yes, we did a double take on the name as well: “Kakadu Plum”. If you have never heard of Kakadu Plum, you are not alone, we found that it resides in the remote bush of northwest of Australia. It’s possible, you might be one of the millions that are missing out on the benefits of this wonderful fruit that can make your skin come alive with a natural shine and glow. So, here are the facts.

Sorry. No data so far.

Enter your email address and we will email you a link to reset your password.

Back to Top
Social media & sharing icons powered by UltimatelySocial